Ecommerce in The Netherlands

The Netherlands is a small country, but it always tries to play a significant role, whether it be economically, political or in sports. The Netherlands participated in the introduction of the euro and was also a founding member of NATO and what’s now called the European Union. It’s also famous for its highly open economy which is leaning strongly towards international trade. Here’s everything you need to know about ecommerce in the Netherlands:

Ecommerce events in the Netherlands

Looking for ecommerce software for selling in Europe? Lightspeed and Shopify are both platforms that are well optimized for cross-border ecommerce.

Ecommerce customers in the Netherlands

Based on data from 2019, an impressive share of 97 percent of the Dutch population has access to the internet. Data from the Thuiswinkel Markt Monitor 2020 shows there are 13.8 million online shoppers in the Netherlands. The Dutch like to pay with iDeal, an online payment method developed by the Dutch banking community. Among the other popular online payment methods in the Netherlands are PayPal, MasterCard and VISA. Popular post-payment methods are AfterPay, acceptgiro (giro transfer) and Klarna. 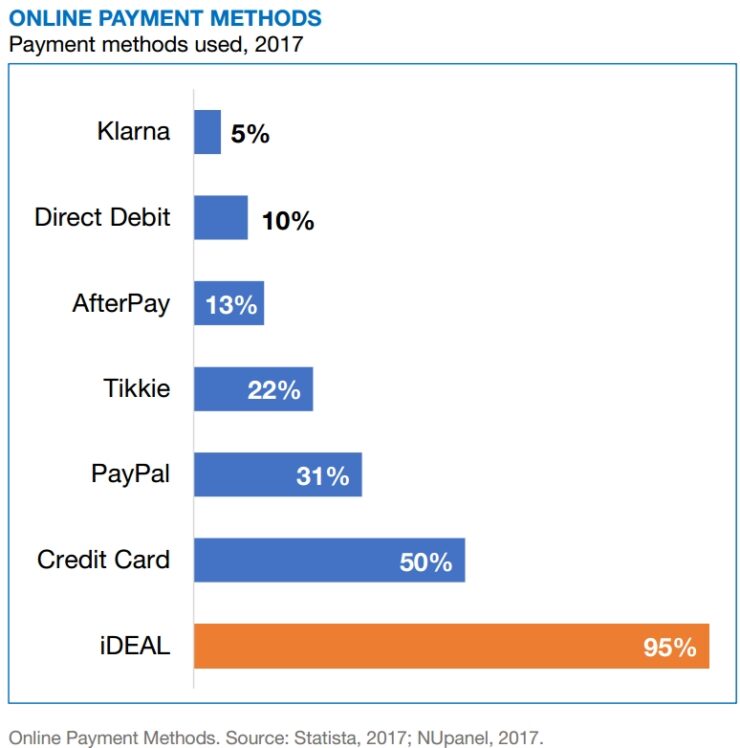 Are you looking to do cross-border business? Get your free digital copy of Cross-Border Magazine now and stay informed.

In 2018, about 35 percent of online shoppers in the Netherlands used their smartphones to purchase something over the internet.

The ecommerce market in the Netherlands

The Dutch ecommerce industry was worth 26.6 billion euros in 2020. That’s an estimated growth of 7 percent compared to the situation in 2019. Online sales in the Netherlands currently account for 10.3 percent of the country’s total retail industry.

Big online stores in the Netherlands

The biggest online stores in the Netherlands are Bol.com (the biggest for quite some years now), Wehkamp, Zalando, Coolblue, H&M, Hema and Thuisbezorgd.nl. If you look at this list, it’s directly noticeable that almost all of these are local players, with exceptions for Zalando (Germany) and H&M (Sweden). Amazon and eBay, for example, aren’t that big in the Netherlands. This is mostly because consumers are very hooked on Wehkamp.nl and Bol.com, two players that are online for over 20 years. But also because the Dutch really like to pay online with iDeal, and that’s something those international players didn’t or still don’t offer. But that might change, as Amazon launched in the Netherlands in 2020.

Latest news about The Netherlands

June 18, 2021Booste, a Polish financing platform for ecommerce merchants, has raised 12 million euros in a Series A funding round. The fintech company will use the money to expand its services to the United Kingdom, Ireland, and the Netherlands.

June 8, 2021Online marketing agency 10XCrew from the Netherlands has acquired Vorwärts, a German Amazon agency. Both companies are specialized in direct-to-consumer strategies and online marketplaces like Amazon and Bol.com.

My Jewellery expands to Germany

May 27, 2021Dutch retailer My Jewellery expands to Germany. Tomorrow, the omnichannel retailer will launch its first online shop abroad. In time, My Jewellery wants to open physical stores in Germany as well.

May 20, 2021Dwarfs is a new scaleup from the Netherlands that wants to acquire and scale successful ecommerce companies that sell on marketplaces such as Amazon and Bol.com. Dwarfs has between 30 and 40 million euros to spend and wants to make twenty acquisitions just this year.

Read all our articles about ecommerce in The Netherlands.