Online stores in Belgium have generated a total turnover of 8.2 billion euros in 2019. This is an increase of 17 percent compared to the situation one year before. One out of every four euros generated by Belgian online shops came from foreign shoppers.

The latest E-commerce Barometer study, based on transaction data provided by payment service providers, shows that the number of online sellers has increased by 20 percent to 29,231 last year. But although the number of online shops is increasing, it’s still a relatively small part of sellers who account for the lion’s share of the Belgian ecommerce sales. The study shows that less than thousand online stores generate 87 percent of the total ecommerce revenue.

Less than 4 percent of online merchants account for 87 percent of the sales.

When we take a look at the online stores and divide them in segments based on revenue, it shows that all segments are growing. And although the big players are still taking a large piece of the pie, small online stores have shown a 33 percent growth last year, while micro online stores even grew almost 49 percent. 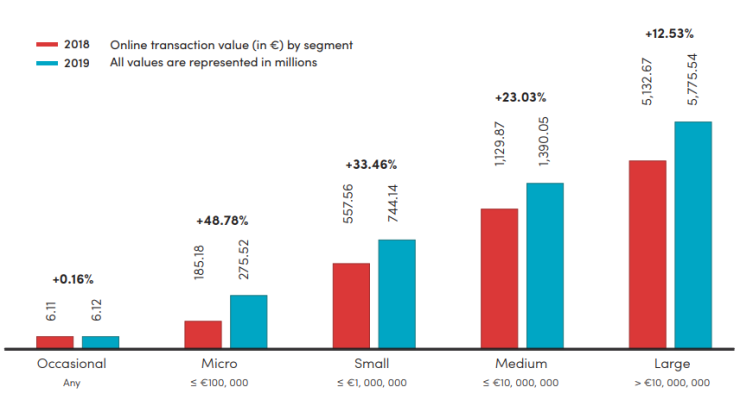 “This year we are seeing double-digit growth again. That’s impressive and it also shows that ecommerce is still on the rise in Belgium”, says Lucas De Dycker of The House of Marketing, who co-published the study together with ecommerce association SafeShops. “Every day, 13 new online shops are added, there are three transactions with an average value of 96 euros. So, we can say there’s a strong confidence in ecommerce, on both the consumer and retailer side.”

13 online shops are added every day.

A quarter of the 8.2 billion euros generated by Belgian online stores came from foreign shoppers. The top 5 of cross-border purchases at Belgian stores consists of France, the Netherlands, the United Kingdom, Germany and the United States. With an average order value of 81 euros the Dutch spent the least, while Brits spent the most (on average: 136 euros).

The most preferred payment method in Belgium in 2019 was Bancontact, followed by credit cards. “The Belgian culture is more used to debit cards. But when it comes to higher amounts, credit cards are used: the average spending is 72 percent higher than with debit cards”, the authors says.

Bancontact was the most preferred payment method in 2019.