Online sales in the Canary Islands are one of the main challenges for ecommerce companies selling their products in Spain. The islands, including Tenerife, Fuerteventura and Gran Canaria, are known for its special taxation, which make it not a very popular shipping destination for online stores. The ecommerce industry in the Canaries however generated a turnover of 278.6 million euros in 2012.

This is evident from the Canarian Agency for Research, Innovation and Information Society, aka ACIISI. Director Juan Ruiz Alzola announced the latest data during a presentation that took place last Monday, at the headquarters of ACIISI in Gran Canaria, one of the twelve islands of the Canaries. ‘El Informe sobre el Comercio Electrónico’ (the report on electronic commerce) explains the measures implemented to facilitate ecommerce on the islands, as well as the particular circumstances of the archipelago that affect the traffic of small goods to and from the Canary Islands.

Based on the National Institute of Statistics a total of 11 million Spaniards have at least shopped once online during 2012, while in the Canaries alone there were about 341,000 online shoppers. 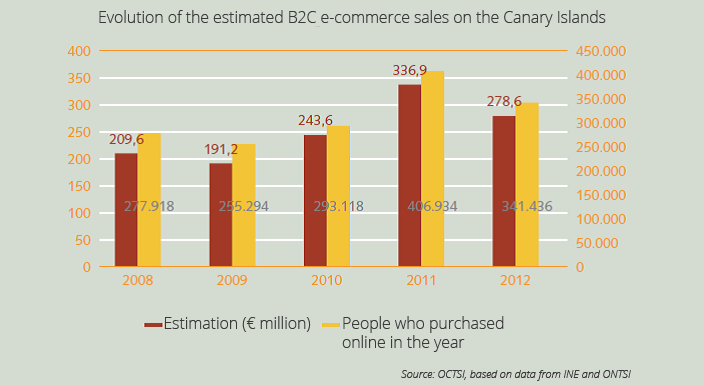 Powered by the emergence of online shops from large retail chains and recognized brands and by online stores opened by large internet companies, more people are using credit cards to complete their online purchase. For them it’s about the convenience of placing orders without having to go the store, the ability to analyze and compare various products and to have access to deals, among others, the study says.

The geographical segmentation of ecommerce in Spain (% of turnover): 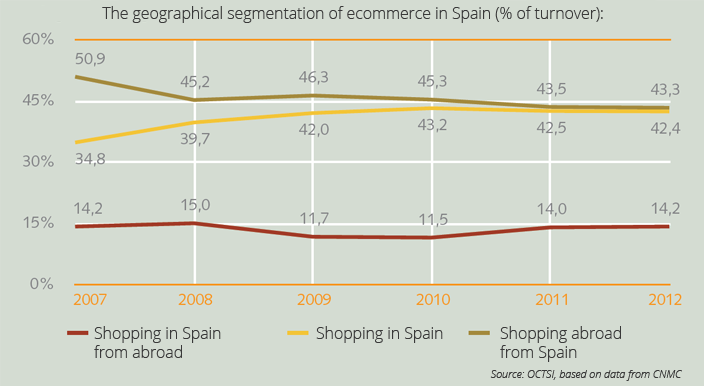 Spanish readers can find the complete report on the website of OCTSI.