The expected percentage change is slowly decreasing in comparison to recent years. Last year, ecommerce in France grew 11.7 percent, while in 2018 it increased by 13.3 percent. 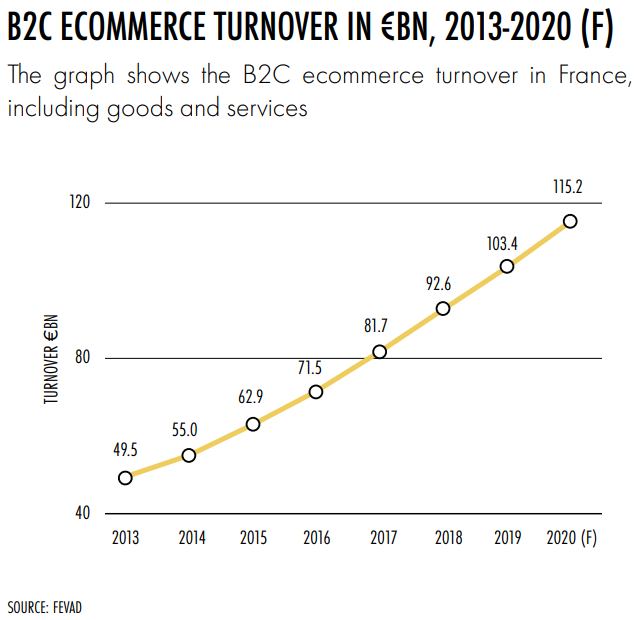 The share of France’s GDP that is made up by ecommerce sales is increasing though. Last year, it was at 4.27 percent, but it’s forecasted that this year ecommerce will account for 4.63 percent of the country’s GDP. That is twice as much as it was in 2013. This is one of the many findings from the France 2020 Ecommerce Country Report by RetailX.

In the last couple of years, the share of the French population using the internet who shopped online has increased by several percentage points. The proportion of shoppers who buy online was at 77 percent last year and is expected to reach 79 percent this year. But it’s not only this percentage that’s growing, individuals are also spending more.

In 2015, the average online shopper in France spent 1,516 euros, while last year it was 2,266 euros. For this year, it’s predicted by RetailX that online shoppers will spend 2,428 euros on ecommerce websites.

Most popular payment methods in France in 2020

RetailX also analyzed the most popular payment method in France, based on preferences and use (as a percentage of ecommerce product turnover). It shows that the bank card is, by far, the most popular payment in France, with 80 percent. It’s followed by online banking (11 percent), consumer credit (4 percent), bank transfer (1 percent) and other methods (a total of 4 percent).

When French consumers have placed their online orders, they mostly prefer to have the items delivered at home (85 percent). Delivery in Relay points (68 percent) and collecting at the store (28 percent) are other popular delivery method preferences.

When it comes between buying products in-store of online, it shows that fashion is the category with the highest share (58 percent) of internet users who bought these items online. Other popular product categories online are cultural goods (50 percent), travel/tourism (40 percent). Categories such as home services (7 percent) and glasses and contact lenses (also 7 percent) are significantly less popular online.

When we look at the number of customers in the last twelve months, as a percentage of internet users, Amazon, FNAC, Cdiscount, Veepee and E.Leclerc are the largest online retailers in France. Amazon welcomed 53.7 percent of French internet users to its ecommerce website, significantly more than the share of internet users (27 percent) Fnac attracted in the same period.