May 22, 2019 by Ecommerce News. About Statistics with tags Spain.

This is shown in the latest report on Spain from the Ecommerce Foundation. This study also shows that 2.69 percent of the country’s gross domestic product is expected to be made up by ecommerce sales this year. Last year, this share was at 2.33 percent. 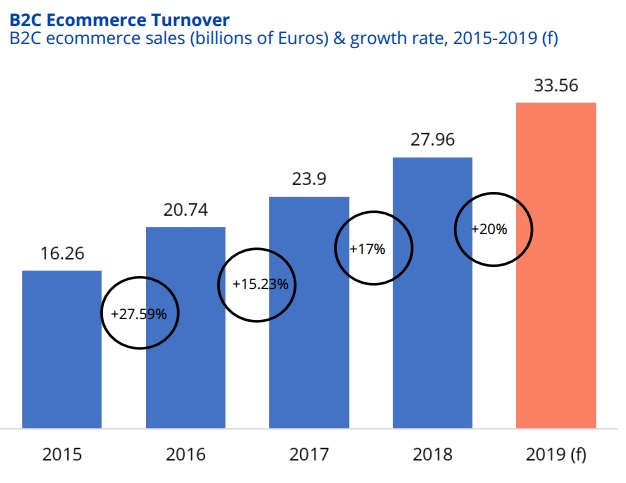 Last year, 62 percent of the online population in Spain has shopped online. For this year, it’s expected to increase just a little bit, with 1 percentage point. Also, the Ecommerce Foundation estimates that the average online shopper in Spain will spend 1,304 euros online this year. That’s almost two hundred euros more than one year before.

There are, of course, many reasons to buy something online. For most Spanish consumers, it’s the fact they can have items delivered directly to their homes which leads them to shopping online. Another popular reason is that ecommerce is available around the clock. Cheaper prices is another important reason to buy online.

Spanish consumers use Smartphones and laptops for online shopping

The most preferred payment method in Spain is still an online payment method (63 percent), such as PayPal or Amazon. Debit cards (56 percent) and credit cards (49 percent) are other popular payment methods among Spanish consumers who need to pay for the items they buy online.

Clothing and shoes are the most returned items