Last year, ecommerce in the Netherlands was worth 20.16 billion euros. This corresponds with an increase of 23 percent compared to the situation in 2015. The Dutch especially love to buy shoes and lifestyle products online, as well as IT and (near)food products.

These are the key findings from the Ecommerce Report The Netherlands 2017, published by EcommerceWiki, together with Dutch ecommerce association Thuiswinkel.org and research company GfK. The Netherlands remains an attractive online market. Despite its relative few inhabitants (17 million), the country has an internet penetration of almost 94 percent and a steadily increasing GDP per capita of 40.900 euros.

In the beginning of this year, consumer confidence has grown 14 points, which has resulted in an increase in consumer spending. Last year, the Dutch spent 20.16 billion euros online, of which 75 percent was spent on services such as travel and insurances. For 2017, a growth percentage of 20 percent is expected, which should result in the Dutch ecommerce market being worth over 24 billion euros. 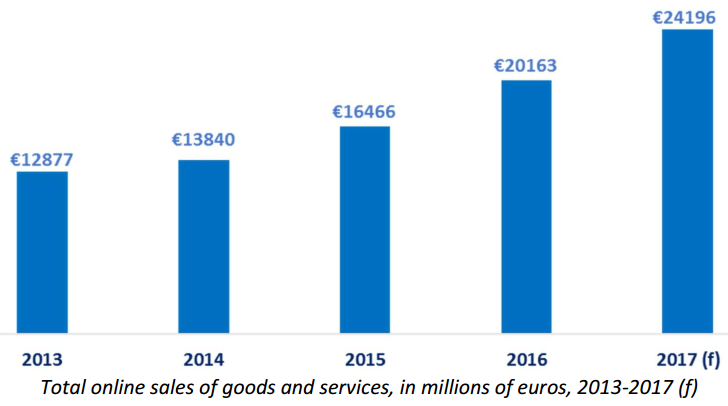 A quarter of every euro spent online in the Netherlands, was spent on products. Media and entertainment products were bought the most in terms of transactions, followed by event tickets and fashion items. Last year, 15.2 million online shoppers spent on average 116 euros per transaction and spent a total amount of 1.242 euros online.

“However, the Ecommerce market in the Netherlands is not an easy one to enter”, Ecommerce Wiki writes. “Although Dutch are quite fluent in English, they still prefer to shop online in Dutch. Likewise, the local payment method Ideal (57 percent market share) is a must have to sell online in the Netherlands.”

There are currently over 32,000 online stores registered at the Chamber of Commerce, but the actual number of online stores in the Netherlands is estimated to be as high as 50,000 or more. Nonetheless, Dutch consumers also like to shop online across the border. Last year, a quarter of the Dutch (26 percent) bought cross-border at popular websites like Amazon and Zalando. For Dutch cross-border shoppers, China is currently the most popular country to shop abroad.