Despite the economic problems Western Europe has to fear, all is still going well on the ecommerce front. According to data from the “European Online Retail Forecast 2012 to 2017” from Forrester Research, European online sales in key markets (the UK, France, Germany, Italy, Spain, Sweden and the Netherlands) will rise an average of 12% annually in the aforementioned period.

Forrester isn’t the only one that thinks things are looking pretty good for the ecommerce sector in Western Europe. eMarketer published some new forecasts for digital sales in January 2013 and in those it says dat B2C ecommerce sales in Western Europe will reach €342 billion ($438 billion) by 2016. 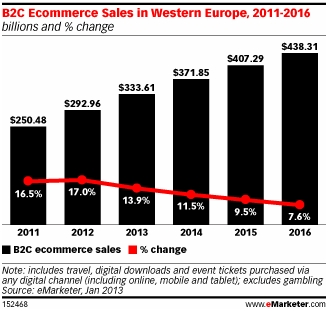 The more mature markets (UK, France, Germany and the Scandinavian countries) will see momentum decline. And countries such as Italy and Spain will maintain a compound annual growth rate of 16% and 18%, respectively. In countries where shopping online is already well established, like the UK, expansion will be slower. But nonetheless it’s predicted that in every Western European country double-digit growth will continue this year. By 2014 countries like France and Germany will see an annual growth rate under ten percent.

If, as a non-European online merchant, you would like to sell in (Western) Europe, then maybe you should try your luck in Germany. Because this year nearly 179 million peoples, ages 14 and older, will buy goods via digital channels. And of all these people one in four will be German residents. Good news for ecommerce, because the German economy will probably remain one of the most stable in the region and their consumers should enjoy a higher level of disposable income than in most other markets. Germany, here we come!