It was a good year for the ecommerce industry in the Netherlands. Sales grew with 11 percent in May, compared to the same period one year before. At the same time, the overall retail industry declined with 0.6% in this period. So, hooray for ecommerce!

Statistics Netherlands, better known as the Centraal Bureau voor de Statistiek, also shared some other interesting facts about ecommerce in the Netherlands. Four out of five Dutch internet users bought a product or service via internet last year. There are almost ten million online shoppers in the Benelux country and 7.1 million of them are seen as frequent online buyers. Traditionally, the Netherlands is an internet savvy country, so no surprises here.

If we look further, we see the number of frequent e-shoppers has raised from 3.9 million in 2005 to 7.1 million last year. That means 58% of the Dutch e-shoppers ordered something via an online shop in the last three months prior to the CBS research. 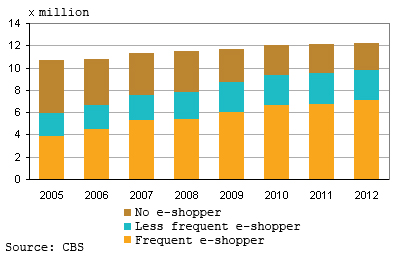 CBS also looked at the different ecommerce sectors. Frequent e-shoppers, when shopping online, look out for holidays, clothing, event tickets and books and magazines. Clothing is specifically popular amongst women, while men are buying more software and hardware online.

Something old, something new…
Almost 70% of the frequent online shoppers bought only new products over the internet last year. One out of four people both new and used goods, while 4% ordered only second-hand items. Just over 40% of the Dutch online shoppers spent between 100 and 500 euro on new products, while a same percentage spent less than 100 euro on new items.