The ecommerce market in the Netherlands has grown with 8.5% to reach 10.6 billion euros. It’s for the first time ever Dutch online stores together sell more than ten billion euros. The number of online orders also grew, thanks to a rise of 11% there were almost 100 million orders last year.

The numbers are coming from a study conducted by Blauw Research, as Webwinkel Weblog wrote this morning. Data also shows that the average online consumers placed nine orders last year. One order more than the average e-shopper made in 2012. According to the researchers, it’s become more common to shop online in the Netherlands. More orders were being placed online and among those, there were also more small orders. Shopping online is clearly not for big orders only anymore. That’s also proven by the fact an average order was worth €109 in 2013, while the value of an average order in 2012 was about €111.

Altogether, 10.8 million Dutch people order something online last year, which is a growth of 2% compared to the year before. The number of new online consumers however, flattens. It’s especially the group of experienced online shoppers who order more and more over the Internet.

Mobile commerce
As we also see in other countries, the Dutch are likewise getting more and more eager to shop online using their mobile devices. More than two million locals placed an online order via their smartphone or tablet last year. But at the same time the borders between online and offline shopping are bound to vanish. “In the morning you check some stores on your smartphone, in the afternoon you search around some more at the office and in the evening you place your order using your tablet”, the researchers outline the situation.

The Dutch ecommerce market is expected to grow between 9% and 10% this year, to reach sales worth of 12 billion euros in 2014. 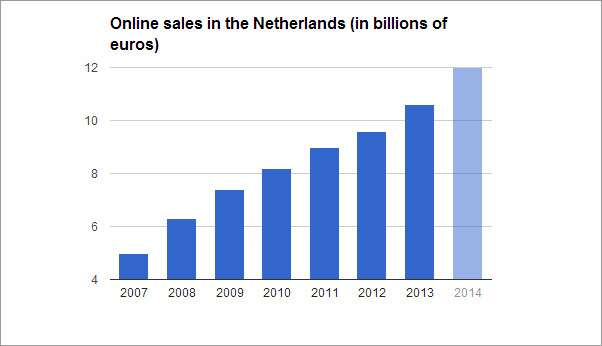