European ecommerce sites are too slow

Many ecommerce sites in Europe are loading too slow. Actually, one in three of Europe’s top ecommerce sites fail to meet the performance demands of online shoppers. And it’s not a unavoidable problem, many websites could speed up a notch by just implementing some standard performance fixes.

The company Radware studied the page speed and composition of 400 top European retailers. They’ve used the Internet Retailer ranking to get a list of ecommerce sites to check. The investigation showed among other things that Amazon.co.uk, Europe’s biggest ecommerce site, has a load time of 3.84 seconds. Number two Otto Group has a load time of 5.22, while number three Tesco is relatively fast with 1.72 seconds to load their homepage. 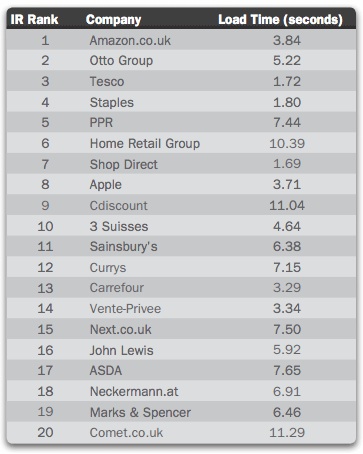 The median load time (for first-time visitors) was about 7 seconds. And clearly, that’s just too long. An average internet user wants a website to load in under three seconds. What’s even more bothering is the fact that one in four European ecommerce sites take over 10 seconds to load. And one in twelve takes even 15 seconds or more to load all the content! Now, you could expect that for a small hobby website but not for a top 400 ecommerce site, could you?

Using a content delivery network which caches page resources closer to the end user, might help too. And for some this may be common knowledge, but it seems that only 21 percent of the top 400 European ecommerce sites use a CDN.