The ecommerce industry in Europe has reached a turnover of 352 billion euros in 2013. Which makes this region a bigger ecommerce market than Northern America or Asia Pacific. The biggest ecommerce countries in Europe are the United Kingdom, France and Germany, as they account for 60% of all online sales.

Scandinavia accounts for 9% and is the biggest ecommerce region after these three countries. These and more data come from Walter Devenuto, president of the European Multi-channel and Online Trade Association (EMOTA), who recently held a presentation at the International Ecommerce Forum in Barcelona. 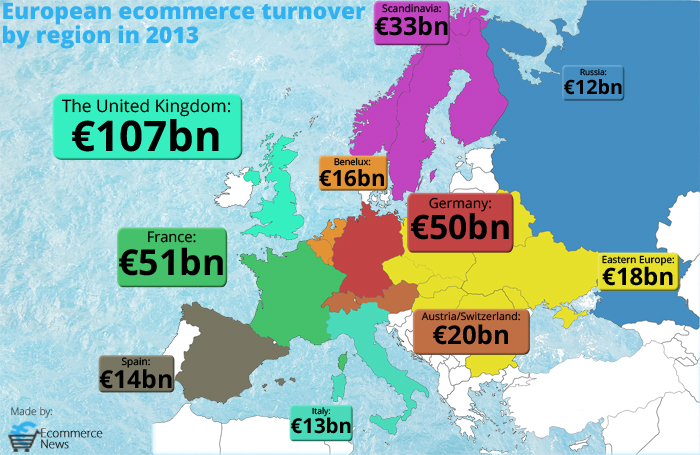 Via local trade associations EMOTA represents 3,500 multi-channel and online retailers in 15 European countries who account for 83% of all European ecommerce, so you could say they have a pretty good view on the whole European ecommerce industry.

Ecommerce growing fast throughout Europe
Last year, the European ecommerce has reached a turnover of 352 billion euros, making this market a bigger one than these in Asia Pacific (€338bn) and Northern America (€318bn). Ecommerce is in any case growing very fast throughout Europe and the biggest growth can be found in Germany (+33%), Russia (+28%) and Eastern Europe (+22%). The average European growth was 17% in 2013.

Cross-border online sales in Europe
And according to data from EMOTA cross-border online sales will grow twice as fast as domestic sales. However, only 11% of consumers currently shop online across borders. Cross-border is particularly popular in the Scandinavian region and Belgium. In Belgium there are more than four in ten online retailers who sell in at least one other EU country. Greece, Austria, the Czech Republic are also among the countries that sell more across borders than the EU average of 25%. 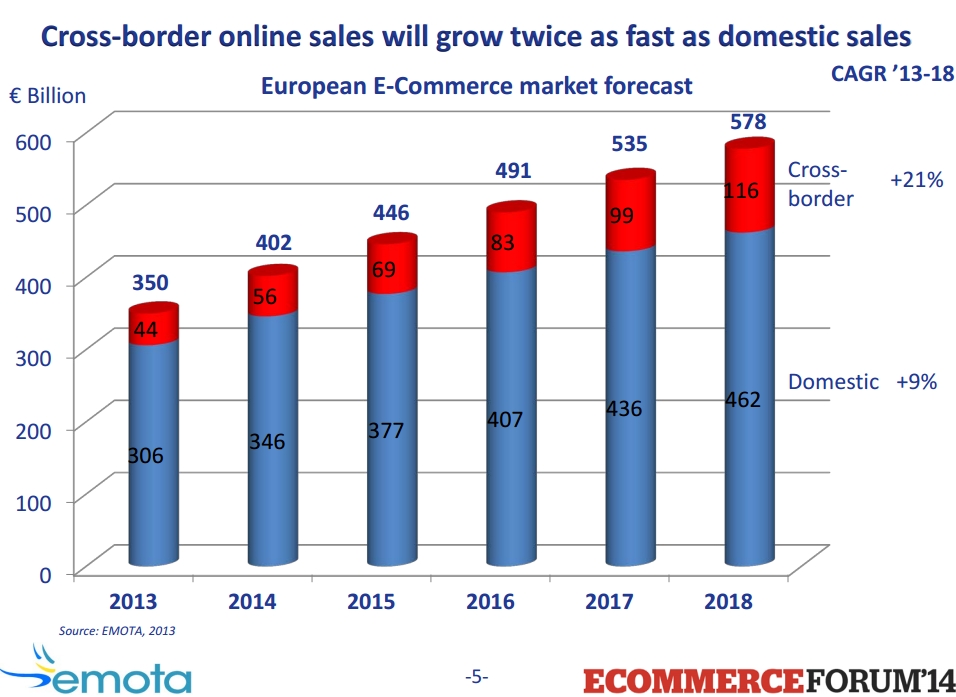 The most common barriers to cross-border sales for retailers are different consumer laws, risk of fraud or non-payments, geographic distance, different tax regulations and delivery costs. The cross-border parcel distribution market is highly concentrated, as there is DHL, UPS, TNT, FedEX and several other, mostly local parcel distributors.

Don’t forget to check out our article about mcommerce sales in Europe!