Fiverr now offers a German online marketplace. For the platform, which connects businesses with freelancers offering digital services, Germany is the first market outside of the United States. The localized website Fiverr.de wants to give German SMEs, startups and solo entrepreneurs better access to experts from all over the world.

Germany is Fiverr’s most important growth market. “Although working with freelancers and outsourcing services is still something new in Germany, since our market entry at the end of 2018 we have been experiencing a steadily increasing demand on both the freelance and customer side”, Peggy de Lange, VP International Expansion of Fiverr, says. “With the opening of our localized marketplace, we want to make it easy for companies of all sized to outsource individual projects.”

We’ve been experiencing a steadily increasing demand on both the freelance and customer side.

Traffic in Germany doubled on Fiverr.com

In the third quarter of last year, the traffic in Germany on the English-speaking Fiverr platform doubled compared to the quarter before, while the number of sellers and buyers increased respectively by 76 and 81 percent.

Due to high demand, Fiverr has now launched a Germany marketplace after only one year of market presence. The company has not only fully translated the platform to German, but it also adapted the entire experience on the buyer side to the culture, needs and behavior of its German users. Prices are shown in euros and users can pay with Sofort banking and Giropay.

Fiverr was founded in 2010 in Tell Aviv. The online marketplace is active in over 160 countries, with millions of users. 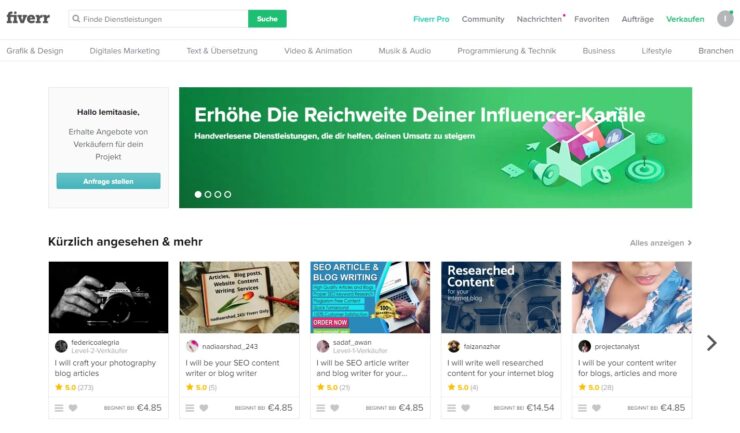