A new PwC study was released last week and based on responses from 15,000 online shoppers in 15 countries worldwide it led to some not so positive results for the French ecommerce market. Only 17% of French online buyers purchase something at least once a week. That’s not much compared with 40% of UK or 76% of Chinese online buyers. The study also shows that in France only 5% of its internet users made their first purchase online less than a year ago. In other words, 95% of France’s internet users are already familiar with buying items online as they also did it more than a year ago. If we compare this with Asian countries like China (10%) or India (38%) 5% is quite low. Even in the United States, known as a country that’s also very familiar with purchasing online, the percentage is higher than in France. A percentage that was 21% in 2012…

When we look at the purchase frequency, France is even at the bottom of the ranking as only 17% of its online shoppers made a purchase at least once a week. If you compare that with those other big European ecommerce countries, the United Kingdom (40%) and Germany (36%), it’s quite alarming what France is showing us. While in 2012 44% of French online consumers made online purchases at least once a month, this year the figure was declined to 36%.

According to Sabine Durand-Hayes, head of PwC France’s retail and consumption division, ecommerce is now part of the things French people do online. It has, in other words, matured. “More than recruiting new online buyers, retailers and pure players should put their efforts into increasing the frequency of purchases in France.”

Use of tablets and smartphone in France
The study also highlights the strong penetration of smartphones and tablets this year. 26% of French online buyers made a purchase via smartphone, against 16% in 2012, and 25% bought something online with a tablet, against 15% a year before. Of course, there are still some obstacles where buying online via mobile devices is concerned. Six in ten French consumers do not purchase this way, because they don’t have the technical means to do so. Also comfort (41%) and security (40%) are some of the obstacles. As a matter of fact, 57% of French online buyers aged 18-24 are concerned about the security of online transaction, whereas in the group over 55 years this percentage is 30%. 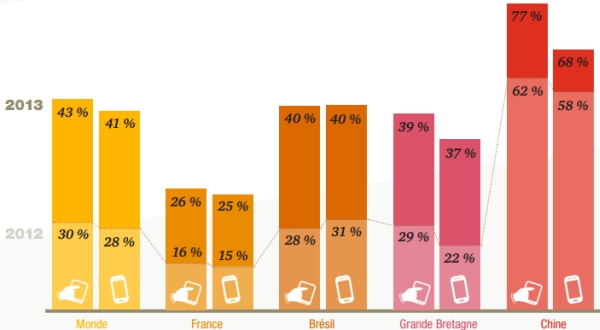