Groupon shuts down in 4 European countries

Groupon closed the doors of 4  European websites. After closing its operations in Greece, Turkey and the Nordic countries, the American ecommerce marketplace is now shutting down in Ukraine, Portugal, Switzerland and Austria. Since yesterday, these websites no longer offer customers interesting deals from local retailers.

On the Groupon Ukraine website it now says: “We regret to inform you that on January 25, 2016 the Groupon company has ceased operations in Ukraine and so we can’t offer you any deals. For our users this means that we will stop offering deals on our website at midnight. At the latest, all existing deals will be valid until 25 February.” Consumers who bought something from Groupon but haven’t used the coupon yet and won’t use it before that date, will receive a refund. The official Twitter account and Facebook page from Groupon Ukraine are offline as well.

Groupon was founded in 2006 and several years later the daily deals website, which by the way started to become more of a marketplace for local commerce, launches operations in many countries around the world. But in recent year the company saw its sales drop drastically in some markets, despite the strong growth in the US. Groupon decided to close some of its international websites. It ended its activities in Thailand, Taiwan, the Philippines, Morocco, Panam, Puerto Rico and Uruguay.

Groupon in Europe
But in Europe as well, Groupon has closed some doors. After leaving Greece and Turkey in September last year, it closed its operations in Sweden, Denmark, Norway and Finland two months later. In September last year Groupon announced plans to cut 1100 jobs as it wants to focus on markets with higher potential. 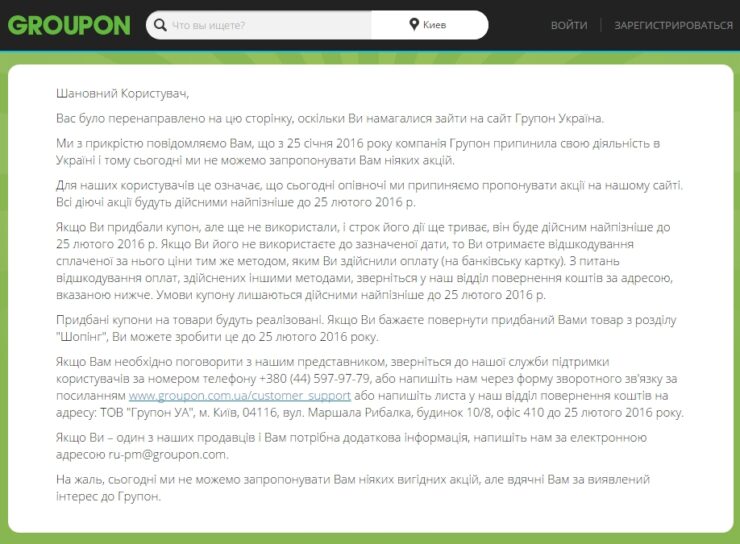