March 16, 2016 by Ecommerce News. About Statistics with tags Croatia, Slovenia.

The number of companies that use the internet as one of their sales channels is growing in Europe, but there are significant differences noticeable between sectors and by company size. Slovenian website SMind made a comparison between the results in Slovenia, Croatia and the average in the European Union.

SMind, a website of comparison shopping platform Ceneje, delved into the latest Digital Agenda Scoreboard research by the European Commission. It found out that 17 percent of enterprises in the EU area sell their products or services online. In Slovenia, this share is a little over 16 percent, while in Croatia almost one-fifth of enterprises are active in the ecommerce industry. In the last two years, the EU average increased by 14 percent, but in Slovenia the share increased by more than 30 percent during the same period. 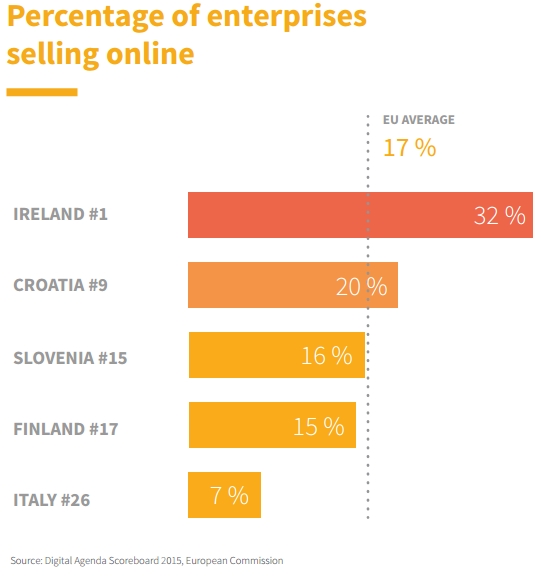 Differences by company size and sector
“Greater distinctions in the percentage of enterprises selling online can be seen if we look at different industries”, SMind writes. “In the wholesale sector, the European average amounts to almost one-third of all companies, and this is about the same in Slovenia and Croatia. On the other hand, when we compare it to retail, the percentages are much lower: in the EU, it’s approximately one-fifth of enterprises who sell online, while the share is just over 20 percent in Slovenia and around 16 percent in Croatia.”

Manufacturing sector
It found out that among large companies (250 and more employees) there is a significantly higher proportion of ecommerce in the manufacturing sector: in the EU the average amounts to 40 percent, while the proportion is one-third in Croatia and almost one in two in Slovenia. Among small enterprises in this sector, the share of companies selling online is about 10 percent in the EU and only 4 percent in Slovenia.

Service sector
But when we look at large companies that sell services, 19 percent does this online in the EU, while in Slovenia it’s one in three companies that sell online. In this sector, the percentage of companies selling online is higher among small (10 to 49 employees) and medium (50 to 249) enterprises. “In the service sector there is only 18 percent of small enterprises selling online in the EU, whereas in Slovenia and Croatia it concerns one in five companies of this size.” 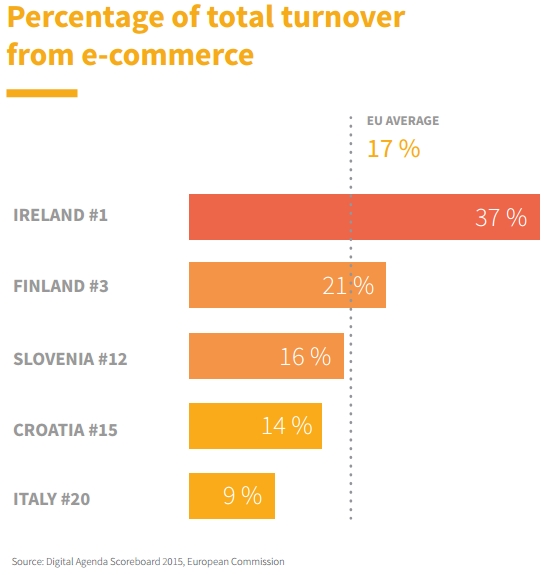 Turnover from ecommerce grew by more than 14 percent in the European Union during the last two years. Ceneje’s CEO Darko Dujič thinks there is “clearly” still huge potential for growth of ecommerce and consequently, traffic from this source. Dujič predicts further development of the online market, both in Slovenia and the EU. “We are convinced that we are only at the beginning. The potential for further growth derives mainly from an increase in the frequency of online purchases and also from a rise in different product groups”, he says. “In some industries, particularly in services, there are still some regulatory constraints that do not reflect today’s technologies. A key for growth in the future will be understanding the channels, target groups of consumers and the benefits (and risks) of different user technologies.”