The top 10 online stores in Germany

Germany is one of the biggest ecommerce markets in Europe. Together with the United Kingdom and France, these three countries represent 6% of the total European B2C ecommerce sector. A lot of German online shoppers visit global ecommerce websites like Amazon, eBay, but its own retail company Otto is also very popular. Let’s have a look at the top 10 online stores in Germany. 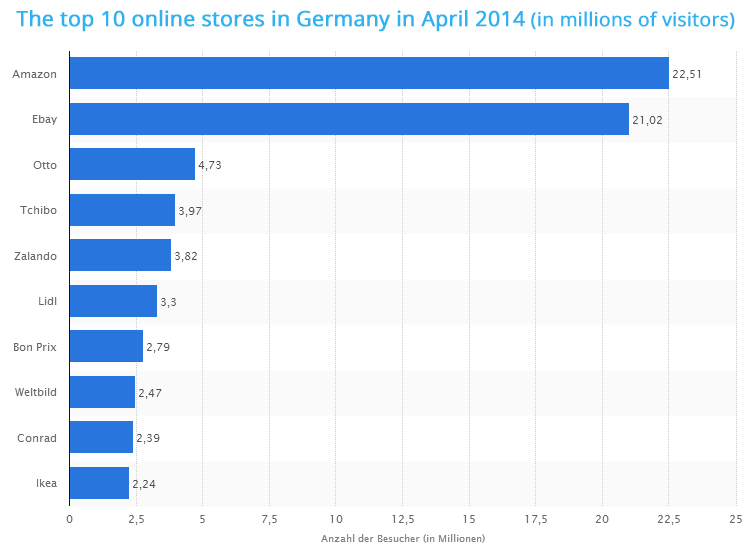 According to Etailment.de, back in March of this year at least eBay could reach the same level of visitors as during the holiday season, but in April all the other big players saw its numbers of visitors decline. Particularly, Ikea lost significantly. In March the top 10 had two newcomers: Bon Prix (owned by Otto) and Baur Versand. But the latter has already left the top 10, as it saw a huge decline in visitors during April. Bon Prix, however went from the eight to the seventh place on the list. The only newcomer in April is Weltbild, an online store that sells books.

Overall however, the German online consumers visited the most popular online stores less than in the previous month, as all stores posted a decline in the number of visitors. Even Amazon was frequented by 41,1% of all internet users, while this was 43,4% in the previous month. The biggest loser during April is Ikea, as it went from 3 million visitors in March to 2,24 million visitors one month later. “Its mix of catalog, virtual showroom and online store doesn’t do Ikea in the long run any favors”, says Etailment.de “It’s neitherone thing nor another. Or are these just seasonal fluctuations in the furniture industry?”