The biggest online retailers in Europe have achieved a combined growth in sales of 15.6% in 2014 compared to the year before. Its collective web sales increased to 123.78 billion euros. Many of the top merchants on Internet Retailer’s newly published 2015 Europe 500 sell online across Europe.

“And that cross-border success is particularly notable at a time when European policymakers are taking high-profile steps aimed at creating a single online shopping market across Europe”, Internet Retailer says. 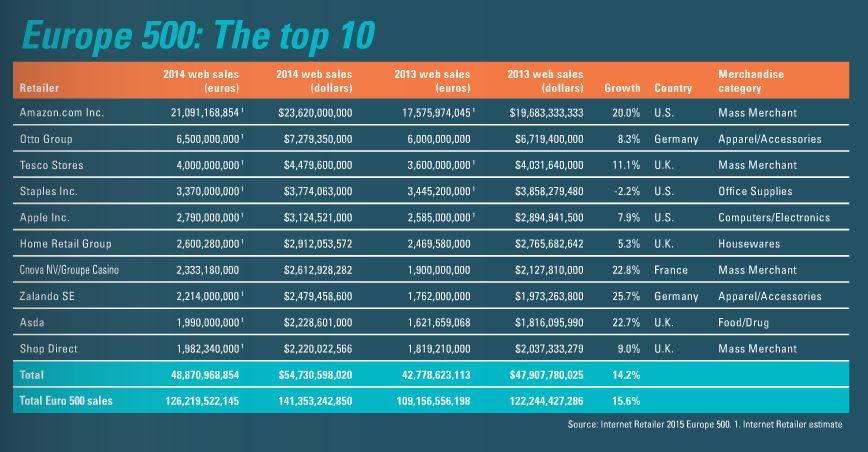 Amazon is the absolute number one, with 21 billion euros of web sales, thereby leaving number two, Otto Group, behind that has ‘just’ achieved 6.5 billion euros of online sales in 2014. Amazon is also one of the fastest-growing companies in this top 10 list, as its sales increased by 20%. For comparison, Otto and Tesco, the numbers two and three, saw their sales increased by respectively 8.3% and 11.1%.

Fastest-growing companies in Europe
But Amazon isn’t the fastest-growing ecommerce company in the Europe 500. That honor is reserved for Turkish retailer Morhipo, that sells clothing and accessories online. This company’s sales increased by a whopping 116.7% to reach 65 million euros last year. Other fast growing companies are Wikimart (Russia), Elgiganten (Denmark), Claire’s (UK) and Hepsiburada.com (Turkey).