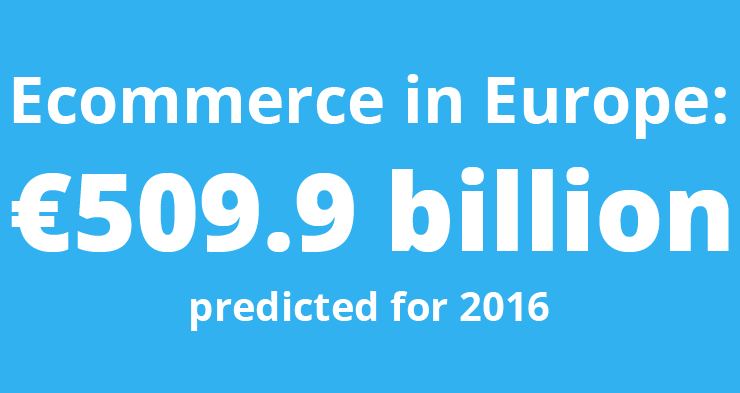 These are just one of many findings from Ecommerce Europe, who published its European B2c E-commerce Report, of which the light version can be downloaded for free. According to this association, the ecommerce turnover in Europe increased by 13.3 percent to reach 455.3 billion last year. For this year, less growth is expected, as Ecommerce Europe predicts the industry will increase by 12 percent to reach 509.9 billion euros.

‘Full potential has not yet been reached’

There are about 296 million online shoppers in Europe at the moment, each of them spending an average of 1,540 euros online last year. Marlene ten Ham, secretary general at Ecommerce Europe, thinks the report provides a promising outlook for the ecommerce industry. “Today, only 43 percent of the European population of 15 years and older shop online, and 16 percent of them buy in another country. Moreover, 16 percent of SMEs sell online and less than half of them sell online across borders. The full potential of the European ecommerce market has not yet been reached”, she says.

Aside from the predicted 509.9 billion euros the industry is expected to be worth in 2016, Ecommerce Europe also looked at the more distant future. For 2017 the organization forecasts total online sales of goods and services being worth 598 billion euros, while in 2018 a total online revenue of 660 billion euros is predicted.

As was the case for the last couple of years, the United Kingdom, France and Germany are clearly the major ecommerce countries in Europe. Last year, they accounted for more than 60 percent of all online turnover on this continent. With 157.1 billion euros, the UK is leading when we look at the size of the B2C ecommerce market, but in terms of the number of online shoppers, it’s Germany who has a greater market presence than their British counterparts (51.6 million versus 43.4 million).

Ecommerce Europe also looked at the fastest-growing ecommerce markets in Europe. Ukraine is the number one on this list, with a growth of 35 percent compared to 2014, followed by Turkey (34.9%) and Belgium (34.2%).

Aside from all the positive figures, growth rates and optimistic averages, Ecommerce Europe isn’t complete satisfied with the industry. Last week, it reacted on the ecommerce sector via its Cross-border Ecommerce Barometer. “The three main challenges for merchants striving to expand their business cross-border are legal fragmentation, taxation issues (VAT) and logistics/distribution.