Ecommerce in the Netherlands was worth 25.8 billion euros last year. This is an increase of 7 percent compared to the situation one year before. The Dutch online retail industry grew mostly because of an increase in online grocery purchases.

The 7 percent growth of last year is lower than in recent years, when the Dutch ecommerce grew with double-digit numbers. But it can be seen as a sign that ecommerce is maturing. For example, the online retail industry in the Netherlands now accounts for 10.3 percent of the country’s total retail industry.

Last year, a total of 258 million online purchases were made, which is an increase of 4 percent compared to the situation in 2018, the latest Thuiswinkel Markt Monitor shows. The number of online buyers stayed practically the same, with 96 percent of Dutch aged 15 years and older that made at least one online purchase last year.

96% of the Dutch shopped online.

The food/nearfood category is – just like in recent years – a key driver for the Dutch ecommerce industry. Last year, online spenditure in this category grew 24 percent compared to the situation one year before. Product categories such as shoes & personal lifestyle (+19 percent) and consumer electronics (+16 percent) also showed a significant growth. 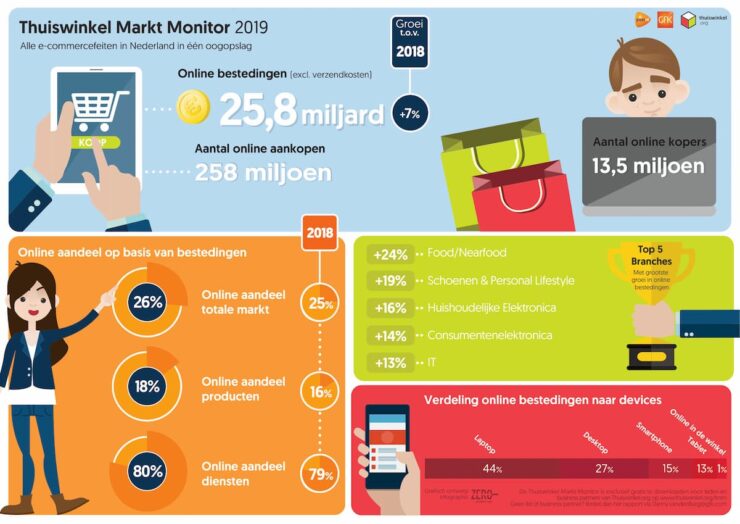