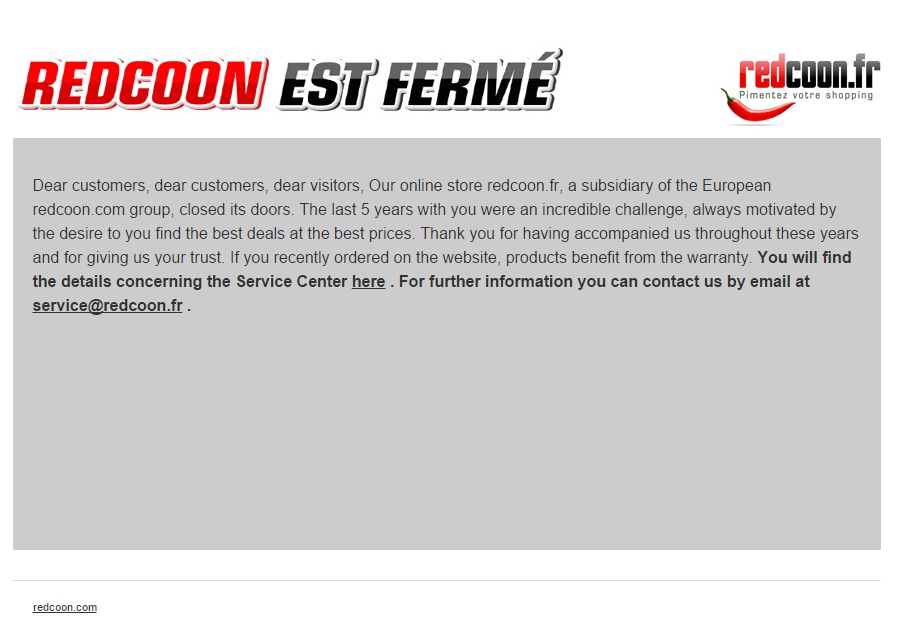 Redcoon withdraws from France and Denmark

Media-Saturn has witdrawn its Redcoon shops in France and Denmark because after five years, these online stores still didn’t generate enough money to keep them up and running. Redcoon thinks there’s more potential growth in the markets where it already has grown to a mature player.

As Channelpartner.de writes, in both countries Redcoon had started relatively late with the online stores, as Redcoon.dk was brought to life in 2009 and Redcoon.fr followed one year later. Unfortunately for the German retailer, these shops have never lived up to their expected reputation.

Back in 2011, Media-Saturn Group acquired Redcoon to further expand its online activities in Europe. Now, only three years later, it decided to close two of these online stores. Online shoppers who now visit the website of Redcoon, will see a big message saying “Redcoon est fermé” (“Redcoon is closed”).

Best deals at the best prices
There it also says: “Our online store Redcoon.fr, subsidiary of the European Redcoon.com group, has closed its doors. The last five year with you were an incredible challenge, we were always motivated by the desire to find you the best deals at the best prices. Thank you for having accompanied us throughout these years and for giving us your trust. If you recently ordered on our website, the warranty remains unchanged.” On the Danish website of Redcoon a similar message appears.

Reaction of Media-Saturn
“In Denmark and France, Redcoon was still very small and was still in the development phase. We would have to invest heavily in brand building and its logistics capacity to achieve a market-relevant size”, Media-Saturn acknowledges. “We will now focus on the countries where the Redcoon brand is already established or where we can quickly reach a certain growth. There we want to increase our market share and further increase the brand awareness.”

Only a few months ago, Media-Saturn started with something they called the Online Electronics Group, with Redcoon as its core. The goal was – and is – to continue focusing all online pure-play activities and to grow further by new acquisitions and new online concepts.

France and Denmark, where Redcoon now has left, are also countries where its parent company Media-Saturn is not active. So maybe it’s all for the best and this will give Media-Saturn the opportunity to focus on less countries so it could achieve more.