The United Kingdom, the United States, Germany, France and the Netherlands are the world’s most advanced ecommerce countries. That’s what we can conclude after we poked around in the Global Perspective on Retail report by Cushman & Wakefield. Europe is doing very well we might say.

The report (pdf) examined the ecommerce industry and looked at the technological infrastructure, the regulatory environment and the size of the retail and online markets in more than 100 countries. It appears that ecommerce globally has been growing at an average of 18% per year over the last three years. By comparison, other retail channels are growing with 1.3% per year.

UK Most developed online retail market
According to the report the UK is the world’s most developed online retail market, thereby defeating the United States and Germany. This is primarily due to the UK’s high volume of online sales per capita: $869 (Norway is no. 1 win $921 per capita). Other determining factor are total retail sales and its openness to new online business and social media. The UK is also the absolute number one, because of its overall retail market size and the fact that its retail market share increased more than any other nation between 2007 and 2012.

When we look at the internet spend per capita per region, we’ll see North America being number one with $552. But it’s still the European countries that dominate the top 20 ranking, with 16 markets(!) making the list. Although the researchers think the rise of mobile commerce could shift the balance of future retail power in favor of emerging markets, particularly those in Asia, where mobile penetration is higher.

The leading online markets of the future
If we talk about the future of ecommerce you can’t get past mentioning China. It is the largest potential market. But don’t underestimate Malaysia, which is currently ranked 34th on the Cushman & Wakefield list. It has a great infrastructure as well consumer potential. And then there is Russia, recognized by the report as having the potential to become a key player in the future online market.

Physical stores, quite important!
What’s also interesting when we look through the rapport is that physical stores might be of an ongoing importance. Flagship stores will get a more prominent role and the value of the best streets and units will continue to rise. “In terms of property implications, some retailers are opting for fewer, larger stores, while others are seeking more but smaller stores. Clearly, there is as yet no right answer on the optimum store network, and needs will continue to evolve as retailers experiment – and landlords must adapt to that”, the report says. 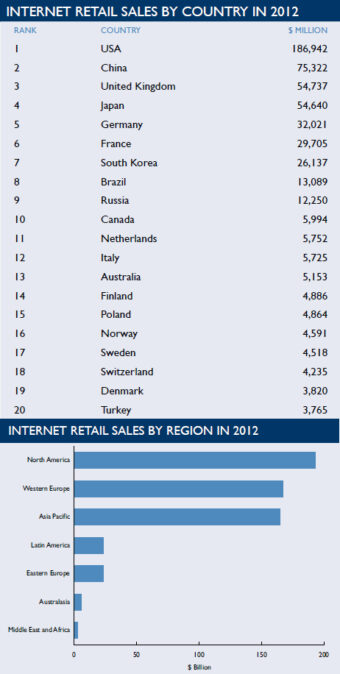