Ecommerce in Sweden has increased just slightly during last year and was worth 14.5 billion euros at the end of 2017. After an increase of 4.1 percent, the B2C ecommerce turnover of Sweden grew only 400,000 euros compared to the situation in 2016.

This can be concluded from the latest report on Swedish ecommerce by the Ecommerce Foundation. The 14.5 billion euros turnover of last year is still more than what other sources calculated. For example, online payments provider Dibs said ecommerce in Sweden was worth 11.5 billion euros in 2017, while PostNord Sverige talks about 6.7 billion euros. These big differences mostly occur because of very different methods of measuring ecommerce revenue: some parties ignore entire industries such as travel or gambling.

According to Ecommerce Foundation’s data, ecommerce in Sweden increased by 32.4 percent in 2016, but only showed a 4.1 percent growth rate one year later. For this year, an increase of 15.4 percent is expected. If this happens, the ecommerce turnover of Sweden would be worth 16.2 billion euros at the end of 2018. 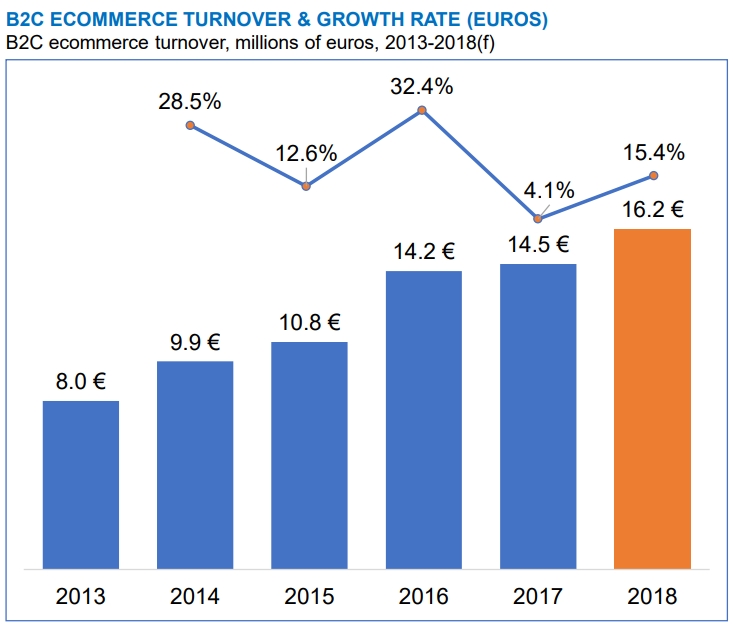 81% of total online population are e-shoppers

Statistics also show that consumer spending in Sweden is forecast to grow steadily next year. The average spending per online shopper was 1,862.12 euros last year and is expected to grow to 1,889.84 euros. Last year, 81 percent of the total online population in this Nordic country are considered as online shoppers. For next year, a 86 percent share is expected.

Based on data from Statista, sales in the children’s items & toys product category showed a 23 percent growth last year, which is the same growth rate as in 2016. Other fast-growing product categories in Swedish ecommerce are building materials (+21 percent), groceries (+19 percent) en home decor and furniture (+18 percent).

Cross-border ecommerce in Sweden is increasing

Last year, purchased from national sellers decreased slightly, while the share of consumers who ordered cross-border increased from 32 percent in 2016 to 33 percent in 2017. When Swedes shop online at foreign ecommerce websites, they mostly buy clothing. This is by far the most popular product category, followed by home electronics, media, sports & equipment and beauty & health.

According to PostNord, about 30 percent of all products sold online in Sweden are being purchased from abroad, but still, Sweden has the lowest percentage of foreign purchases amongst all the Nordic countries.