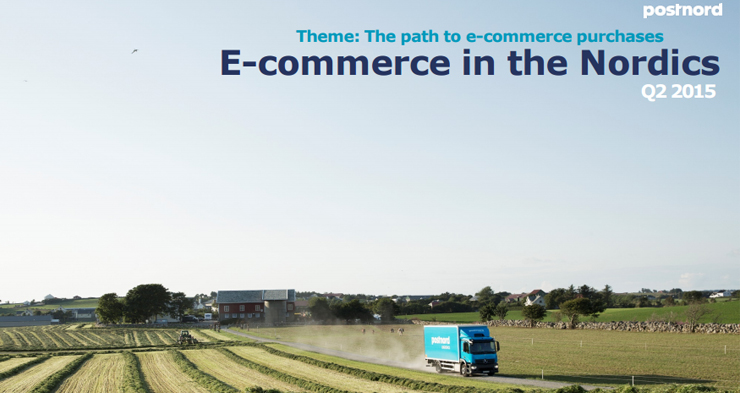 Consumers in the Nordic region made online purchases for 4.29 billion euros during the second quarter of this year. This is an increase of more than 800 million euros or 23 percent compared to the same period last year. Domestic commerce in each respective country grew even harder, by 29 percent.

This is according to PostNord’s latest ecommerce report, called “Ecommerce in the Nordics“. “Nordic consumers are buying more and more online, at the same time as setting high requirements. It is clear to us that listening to their requests is the key to having successful e-commerce offerings”, says Håkan Ericsson, president and CEO of PostNord.

Although most online purchases are still made from computers, and the share of purchases made from tablets is increasing, it’s the mobile phone that’s displaying the strongest growth in the Nordics. The percentage of residents who shopped online using a mobile phone increase by 7 percentage points, to 16 percent. Especially in Sweden, more and more people are using their smartphone to shop online. Over there 20% of residents used this device for ecommerce purchases during the second quarter of this year.

Cross-border ecommerce less popular
Online purchases from abroad seem to be less popular this period, as the percentage of Nordic residents who shopped online at foreign sites decreased slightly. This decrease was most noticeably in Norway, although it is still the country with the largest number of people who shop online from abroad in this region. Consumers in all the Nordic countries like to shop online from the United Kingdom.

PostNord also looked at the type of products people bought online. It seems that clothing and shoes are the most popular product categories, followed by media and home electronics.

How to get Nordic consumers shop online?
PostNord has dedicated a part of its research to the consumer’s path to an online purchase. This one is often through Google, but it’s also common to do research via comparison sites, other online stores or customer reviews. But if an ecommerce company wants to attract consumers in the Nordics regions, they should primarily focus on communication via e-mail. In Sweden and Finland people also prefer getting information in their mailboxes. Danes and Norwegians have receiving information via online channels such as banners or pop-up windows listed as their second choice.