In a major part of Europe, delivery costs are the most important factor for online shoppers who are choosing which online store they will buy from. This doesn’t necessarily mean online customers are fundamentally unwilling to pay for delivery, but the willingness differs per country.

Together with research agency YouGov, Seven Senders asked 8,602 online shoppers in Germany, France, the United Kingdom, the Netherlands, Belgium, Italy, Spain, Austria, and Switzerland. It wanted to know what online shoppers in Europe want and expect from ecommerce providers.

It wanted to know what online shoppers in Europe want and expect from ecommerce providers.

According to the study, for 55 percent of all respondents, the cost of delivery is the most important criterion when choosing an online store. When it comes to a consumer’s willingness to pay for delivery, the situation per country differs and depends on the order value.

For example, for 39 percent of Spanish and 32 percent of French customers delivery has to be free for them to place an order. In the United Kingdom, on the other hand, the figure is only 17 percent. Meanwhile, 52 percent of Brits claim their willingness to pay for delivery depends on the product and its availability.

If consumers in the UK are searching for a niche product that is only sold by a few online retailers, delivery costs play little or no role. In the Netherlands, this feeling was shared by only 21 percent of respondents, the lowest figure from all European countries surveyed.

1 in 3 Dutch expect free delivery for orders over €20.

For many consumers across Europe, the order value is important to determine whether delivery should be free. In the Netherlands, 34 percent of consumers expect free delivery on orders of 20 euros or more. In Italy, on the other hand, this figure was only 6 percent for the same order value.

26% thinks delivery should always be free 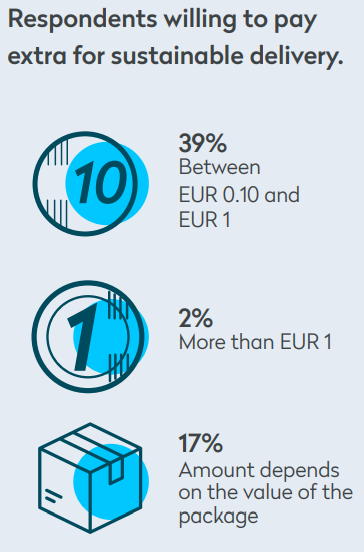 When it comes to sustainability, consumers in Austria (67 percent) and Switzerland (66 percent) are the most willing to pay extra for this. In the United Kingdom and Belgium only 50 and 51 percent respectively are willing to pay more.

Seven Senders also asked respondents about their preferred payment method. It seems that in Italy, 51 percent prefer to use an online payment provider, followed by Germany (46 percent) and the United Kingdom (42 percent). In Switzerland, the figure is just 12 percent. And in France (58 percent), Spain (47 percent) and the United Kingdom (41 percent), credit card is the most preferred payment method.

In the DACH region, payment by invoice is preferred.

In the DACH region, payment by invoice is still very popular. In Switzerland, half of consumers prefer this method, while 34 percent of users in Germany and Austria also use it. Payment on delivery, on the other hand, is most preferred in the southern countries: by 11 percent of Italians and Spaniards, while the share in the other countries is in the lower single-digit range. 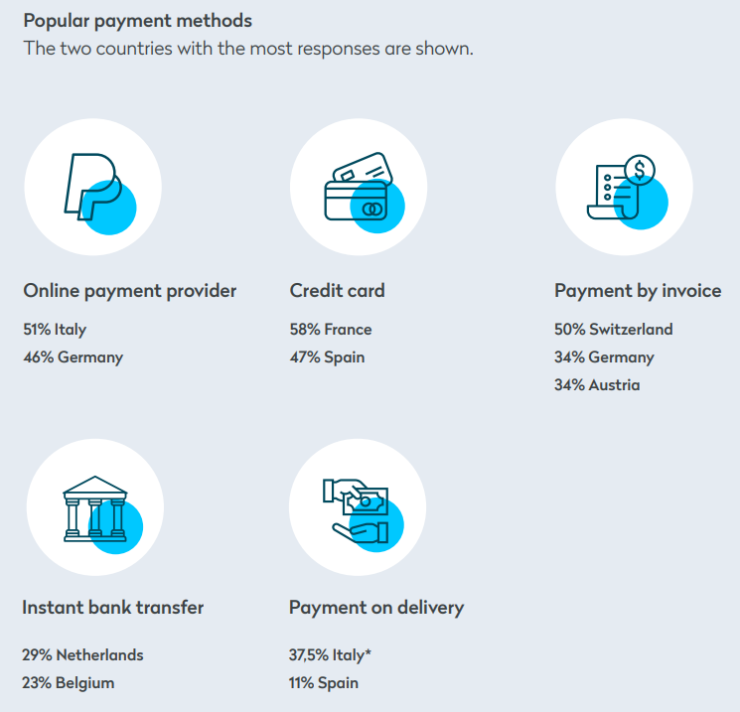 Home delivery is still the most popular delivery method

When it comes to delivery of online orders, home delivery is still the most preferred method. In the UK, 90 percent of respondents go for this option, while in France it’s only 63 percent. That’s because 22 percent of French shoppers like to pick up their package from a post office branch or parcel shop.

The Dutch like to choose a delivery date or time.

Choosing a preferred delivery date or time is especially popular in the Netherlands, where 49 percent of consumers made use of this at least once for their last five orders. That’s way more than in other countries: for example, in France it’s 36 percent and in Belgium it’s 35 percent. In Italy, the figure is as low as 19 percent.