Scandinavia is a region in Northern Europe. It consists of Norway, Sweden and Denmark. These countries, also form the Nordic countries along with Finland and Iceland. Ecommerce in Scandinavia has a lot of potential, as its internet usage is among the highest in Europe. 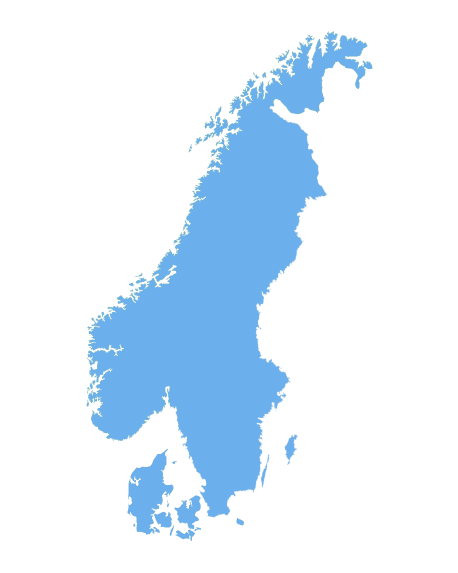 Scandinavia is known for its beautiful landscapes, but it is also praised for its high-performing economy and high standards of living. Scandinavia is a remote area in Europe, surrounded by the Norwegian Sea, the North Sea, the Baltic Sea and the Gulf of Bothnia. Norway and Sweden are connected with Finland, while Denmark also shares a border with Germany.

When it comes to ecommerce in Scandinavia, the region has a lot of potential because of its highly developed digital infrastructure. The Nordic countries also have the highest shares of online shoppers in Europe together with the Netherlands.

The Nordics have the largest percentage online shoppers in Europe.

As much as 100 percent of Norwegians are internet users and more than half of online purchases are done on mobile. To read more about the Norwegian online retail industry, visit our page ecommerce in Norway.

Sweden has the biggest ecommerce industry in the whole of Scandinavia and even the Nordics. Ecommerce consumers in Sweden are expected to spend a total value of 16.86 billion euros online in 2019. To read more about the Swedish online retail industry, please check our information page on ecommerce in Sweden.

The top 100 online stores in Denmark generated sales worth 4 billion dollars in 2020. It is also the second largest ecommerce market in the Nordics and Scandinavia after Sweden. To read more about the Danish online retail industry, please check our page about ecommerce in Denmark.